And, the best shower favor that ever I made? Well, the baby powder scented rubber ducky soaps I made for my super, awesome, action-figure worthy BFF’s shower a few weeks ago were pretty win.

Since she is expecting a baby boy, whom I will forever call Anakin no matter what she decides to name him*, I made the baby ducks blue and the momma ducks yellow. Despite the fact that I can now count three people who have tried to eat them (how does that even happen?) they turned out well.

And by popular demand, here’s how I made them:

Never Get High on Your Own Supplies

Picked most of this awesome up at Hobby Lobby, and the Wilton candy molds were procured at Michael’s.

It takes about two weeks for the soap to cure, but I don’t even really know what that means… soap curing? Like curing childhood diseases or something? 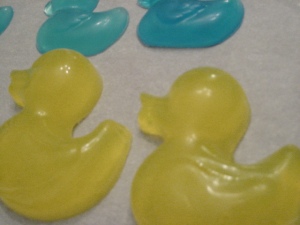 Anyhow, there are six different colors that come in a pack. I made about 80 ducks (two batches for two showers) and used close to 8lbs of soap and two containers of yellow dye and scent. I wrapped them in little cellophane treat bags and tied with ribbon, attaching little tags with everyone’s names written on them so they doubled as favors and place cards.

Eighty ducks and three weeks later my house still smells of glycerine and baby powder, which I would venture to say is better than cabbage and baby poop.

*When she told me she was seriously considering that name for her little peanut she followed up by saying, “I don’t think that movie will be a big deal when he’s older, ya know?” To which I replied, “Star Wars? Really? Not that big, huh.

Did She Really Say That?

To All The Posts I’ve Written Before